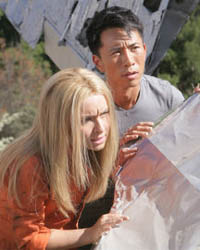 • A scant few months after his return was heralded as the resurrection of the show, Bryan Fuller has left Heroes. Again.

• Transformers 2 has such expensive and complicated CGI that it almost broke down Lucas’ Industrial Light and Magic.

• Christian Bale says not only might there not be no Terminator 5, but neither might there be a Batman 3. Geez, what will he do with himself now?

• Three literary minds with an affection for zombies will be coming to the comics universe to give us the next series of Marvel Zombies: David Wellington, Jonathan Maberry, and Seth Grahame-Smith

• Despite rampant Internet rumors and the inherent awesomeness of the scheme, Lost will not become an attraction at Disney World.