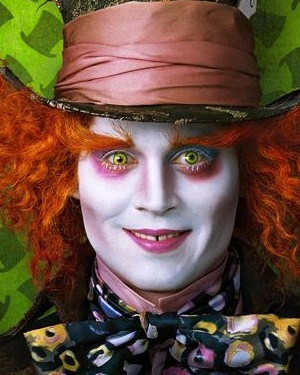 • Johnny Depp makes a creepy and effeminate Mad Hatter in the first production stills of Tim Burton’s Alice in Wonderland. It looks like Burton is trying to nightmare up what is already a purposely disturbing novel, and thus overstate the psychological effect.

• Did you miss the minor periphery character of Yeomen Rand in J.J. Abrams’ Star Trek? She could be coming back in the sequel.

• Speaking of Star Trek, Roberto Orci wants Star Trek II to set up the third film, a la The Search for Spock.

• Frequent Guillermo del Toro collaborator Doug Jones will star as the monster in his upcoming remake of Frankenstein.

• io9 re-examines Tim Burton’s Batman on its twentieth anniversary. I still think it’s one of the best comic movies ever made.

• Battlestar Galactica gets some wonderfully anime-style toys. And while you’re BSGing it up, there’s a new trailer for the spin-off movie, The Plan.

• The New York Times writes about Ray Bradbury’s attempts to save his local public library.