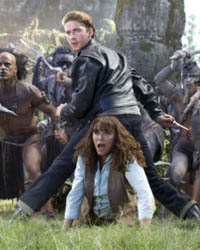 • Variety posts the first review of Transformers 2, saying the artificial intelligence and CGI — of both the robots and the human actors — is top notch. That’s not as much of a recommendation as you might think.

• Roberto Orci fields some questions about the inherent difficulties in writing Star Trek 2, including whether or not you have to go “all new” in the universe or if you can revisit old villains like Khan.

• Everyone’s favorite beef-flavored actor, Shia LaBoeuf, tells the BBC that production on a fifth Indiana Jones movie is underway. So much for our hopes that Mutt would walk off into the sunset.

• The writer of Torchwood says that episodic shows like Lost are ruining television. Unfortunately, Torchwood is terrible for different reasons.

• Discovery examines what a real warp capable ship would look like.