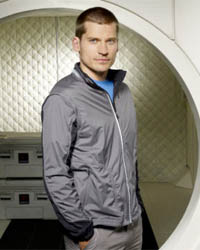 • Neil Marshall, director of Doomsday, is apparently in line to direct the upcoming Predator prequel. They just aren’t taking this franchise seriously any more.

• Ronald D. Moore hasn’t quite given up on Virtuality being greenlit by Fox… but he probably should.

• Fans might have screamed a collective chinese-laced obscenity when Joss Whedon was snubbed from the new Buffy movie. But they’ve been remarkably quiet now that it’s been revealed Whedon was offered the job — and turned it down.

• A screenwriter for Bond 23 has been selected: Frost/Nixon and The Queen scribe Peter Morgan. I wonder what sort of villain his go-to guy Michael Sheen will play…

• It’s well past time: Christopher Lee of Lord of the Rings and Star Wars fame has finally been knighted.

• A Harvard psychiatrist explains explains zombie neurobiology. “A zombie would have a dysfunctional anterior cingulate cortex, rendering it unable to modulate feelings of anger. The result? Hyper-aggression.”