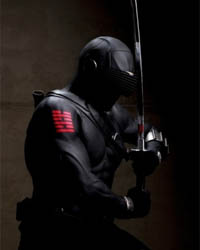 • Megan Fox talks about her role in the upcoming Jonah Hex — sounds like she’s playing the obligatory eye candy.

• Robert Rodriguez confronts rumors that he is looking to get Arnold Schwarzennegger to reprise his role as Dutch in the upcoming Predators. Maybe they’ll do a CGI cameo, Terminator Salvation-style.

• Richard Hatch talks the future of Battlestar Galactica to fans: “It should be more like Star Trek.” Take that, George Lucas!

• Was director Stephen Sommers fired from the G.I. Joe movie? Probably not, but all signs still point to Joe being the stinker of the summer.

• The ultimate Doctor Who fan buries himself in a police box.

• Here’s an interesting article on what Batman‘s rogues gallery can teach us about game theory and the prisoner’s dilemma.