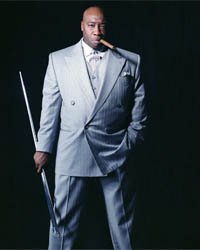 • Can Star Wars be rebooted a la Star Trek? Sure, but you shouldn’t, especially if your advice is “Hire Joss Whedon.”

• Rumor has it that 20th Century Fox isn’t interested in Ridley Scott’s Alien prequel unless Ridley himself directs it.

• Kirsten Dunst talks Spider-Man 4, hinting that Kingpin may very well be the villain even though he was already the main villain of Daredevil.

• Katee Sackhoff is joining the cast of 24. Between that and Bionic Woman, the actress is well on her way to making Battlestar Galactica her one and only wise career decision.

• UGO spins out another epic list: 78 things we hate about Leonard Nimoy.

• Dick Grayson may be the new Batman, but Bruce Wayne probably still lives… in the pre-historic past.

• The tenth Doctor Who gets a funeral, thanks to one obsessed fan.