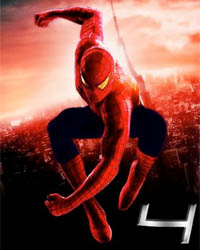 • Terminator Salvation had one of the worst scripts — and worst openings — in recent scifi memory. Nevertheless, rumors of a fifth flick involving a time traveling John Connor are already swirling.

• Spider-man 4 production news round-up: Kirsten Dunst will be reprising her role as Mary Jane, and the vampire king Mobius will not be the villain.

• James Cameron will be lending his expertise to the movie Heavy Metal as an executive producer.

• Ridley Scott will be doing a web series that takes place in the Blade Runner universe.

• Bam Kapow lists the ten silliest X-Men of all time. Beak, anyone?

• An oldie but a goodie: A young Jay Leno visits a young David Letterman’s late night show to do his Star Trek schtick.

• After twelve years, the Outpost Galifrey Doctor Who fansite will be closing its doors for good.