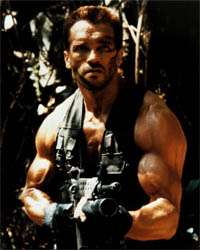 • Robot Chicken scribe Dan Milano will be helming a remake of Short Circuit. This can’t be a good idea.

• Stanley Kubrick’s 2001 inspired a rather bizarre Marvel Comics series that took the base concept of the movie and expanded it into Marvel’s proper comic universe.

• Robert Rodriguez wants Arnold Schwarzenegger to reprise his role as Dutch for his upcoming Predators sequel.

• No matter who wins, we lose: Tin-Tin Versus Predator.