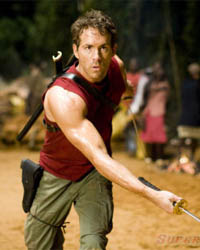 • Ryan Reynolds confirms he’ll be expanding his role in the recent X-Men Origins: Wolverine to a Deadpool feature film.

• The next companion for Doctor Who has been announced: the fire red Karen Gillan. Swoon.

• The identity of that weird Lost Egyptian god is now confirmed: Taweret, the demon-wife of Apep, who is the original god of evil. Sounds spooky.

• If you’ve been thinking to yourself, “Gosh, I really wish there were some way to get my hands on some fresh Logan’s Run material,” you’re in luck. The scifi thriller is back — in comic form.

• Here’s a look at the groovy mech warriors from Avatar, James Cameron’s much bally-hooed 3D bonanza.

• My favorite steampunk author, China Mieville, talks his new book, The City and the City.