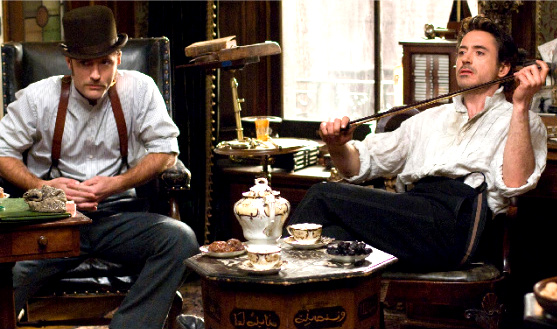 So how did Guy Ritchie’s Sherlock Holmes wander into a horror blog? That’s quite the wrong turn at Baker Street. For the answer, look no farther than the cracking trailer Warner Bros. just unleashed: This is no staid Victorian mystery, heavy on raciocination and short on the good stuff. It has vampires and levitating maidens! Unearthed coffins! Portentous strings! And much, much more! The Gothic trappings come as no surprise to those who’ve been following every detail of the movie’s development, but now the word is seriously out: This Great Detective is taking names and kicking butt.

Back in summer 2008, when Sherlock Holmes was just a wisp of pipe smoke in the eye of middling Brit director (and then-Mr. Madonna) Ritchie, bloggers at Slashfilm seized on the news that he’d be directing the minute Warners went public.

“Ritchie is clearly untested when it comes to studio blockbusters,” wrote Hunter Stephenson, “And I wonder how much of his frenetic style will transfer over. But it sounds like a cool project for him and I’m glad it’s a Brit in the director’s chair.” Cautious ambivalence was the order of the day, though most reactions tended toward the dubious. “Now this is a combination I never saw coming,” marveled Elisabeth Rappe at Cinematical.

As Ritchie forged ahead, script reviews started popping up ’round the web. “At best it’s a fun, harmless romp through the Holmes mythos, revitalized for audiences assimilated with the ‘Bourne’-style, action, smarts and authenticity vibe,” wrote The Playlist, before adding, “at worst its “Pirates of the Caribbean” set in Scotland Yard – mindless, escapist entertainment that’s trite and hokey.” Ouch! Commentator Don retorted, “As a lifelong Sherlockian, I’m compelled to say that not only does this sound like a travesty, but it sounds atrocious.” Double ouch!

The announcement that Robert Downey Jr. had been cast as Holmes, with Jude Law playing his stalwart sidekick, Dr. John Hamish Watson, ratcheted up the debate. And word that Ritchie and company intended to emphasize the detective’s street-fighting skills (which, to be fair, are right there in Sir Arthur Conan Doyle’s original stories) only pumped up the volume. Said a disgruntled reader (one of the least pottymouthed of the bunch) at Stereohype, “Why do I get the feeling this movie will only resemble Sherlock Holmes in-name-only? Sounds like it’s going to be little more than an action movie in which the character just happens to be named Sherlock….I very much doubt this movie will be able to capture even just an ounce of the brilliance found in the UK series starring Jeremy Brett.” The forum folks at Empire Online were more measured, with commentator Keir reminding the detractors that “You were the same cretins who whined like little bitches when Heath Ledger was cast as the Joker.” Ahem.

As production got underway, such voices faded while more generic rumors took center stage. Remember when the media world thrummed with the news that Madonna and Ritchie were headed for splitsville? (Ah, memories!) Shortly after, a rash of injuries — including a head gash for Downey that required — gasp! — stitches, prompted the more hystrionic websites to wonder, “Is the Sherlock Holmes Set Cursed?”

Short answer: Um, no. In December 2008, the first official set photos surfaced, featuring an almost unbelievably buffed-up Downey in period costume. E! Online’s shameless The Awful Truth blog promptly placed Downey-as-Holmes on its horrific “Do-Me Meter” and gushed: This ain’t your mum’s 19th-century detective, that’s fer sure…What’s Jude Law’s Watson gonna look like, a Chippendales dancer?”  Longtime Holmes devotees dismissed such talk, reminding the author that while Holmes may not have been described as “ripped,” “Doyle characterized him as rather fit — he was a fencer and a boxer and I believe he was also known as fast on his feet. So why not?”

All that speculation is officially moot now that the action-packed, decidedly modern Sherlock Holmes trailer is out there for all to see, and it’s already been parsed within an inch of its life. “It’s like one of the parody traliers from tropic thunder – ridiculous,” wrote Jaysus on TrailerAddict.com. “Classic case of a brilliant character and verdant narrative being ripped to shreds by an extremely average film maker. Utter rubbish simultaneously tainting a legend. Richie should have retired after lock stock.” Others were more succint. “What in the hell did they do to sherlock holmes???

Boldly embracing the other side of the debate, FilmSchoolRejects linked to the trailer with the perky headline “First Sherlock Holmes Trailer is a Bit of Brilliant,” while TwitchFilm chimed in to report that “You could say that, yeah. Ritchie has hugely amped up the action factor while also spiking a liberal dose of humor into his concoction and the resulting mixture looks rather fun indeed.”

The real question is whether Sherlock Holmes stands a chance against the dreamy vampires of New Moon: The movies go head to head on November 11, 2009, exactly one year after Twilight proved the power of tween spirit, and the film’s distributor modestly hoped that if the sequel did as well, they’d be very happy indeed. Apparently he had no idea the boost Robert Pattinson’s well-moussed locks and moody eyebrows would give the teen franchise in the months to come. How things change…