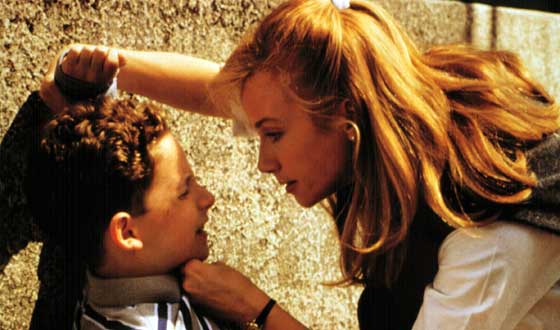 It’s so hard to find good childcare! Teenaged babysitters are out: At best they smoke pot, make out with their boyfriends and get killed by unstoppable psychokillers; at worst they freak out on LSD and put the baby in the oven, thinking it’s a turkey. But nannies… well, who wants to wants to be humiliated on Nanny 911 or made to look like a self-absorbed lemon tart in some Nanny Diaries-style roman a clef? Still, it could be worse, as these movies amply demonstrate…

What Ever Happened to Baby Jane? (1962) and Hush… Hush, Sweet Charlotte (1964): This is Bette Davis at the height of her “Boris Karloff in skirts” period, playing cat-and-mouse games with a little brat whose distant father and drunken, weepy mother won’t listen when he says that dowdy, solicitous, sweet-as-pie Nanny drowned his younger sister in the bath and is trying to do the same to him.

The Hand that Rocks the Cradle (1992)
So, you’re a high-strung, asthmatic, stay-at-home mom who, while pregnant with your second child, was molested by a gynecologist who subsequently kills himself. Maybe you should hire a perfect stranger to care for your children, someone like Rebecca De Mornay. De Mornay’s full-tilt loony performance as the psychonanny is actually sheer brilliance. Why it didn’t do for her what Fatal Attraction did for Glenn Close remains a mystery.

devil-child shocker was a big old ho-hum, but enticing serial-mom Mia Farrow (Angelina Jolie is an amateur by comparison) out of ten-year retirement to play Nanny-from-Hell Mrs. Blaylock was sheer genius. The frail Farrow may not look as though she’s got the right stuff to protect Satan’s spawn, changeling Damien Thorne, from the forces of righteousness. But when her devilish charge is threatened, she does a mean impression of a Tasmanian devil in a Laura Ashley dress.

The Guardian (1990)
Yes, Exorcist director William Friedkin set the bar on movies about demonic kids. No, he didn’t do the same for movies about demonic nannies. Sweet-faced Camilla (Jenny Seagrove) from the Guardian Angel Agency aces the nanny interview with maternal cooing. Her employers fail to notice that she has the soul of an ancient Druid and plans to sacrifice their baby to the big old tree with which she has a deeply unnatural relationship. Harry Potter‘s whomping willow has nothing on Camilla’s woody alter-ego, which wallops unwary interlopers with its low hanging branches before impaling them on its flailing roots.

Click here for the full movie schedule for The Innocents, a movie that makes the most of a tremulous governess, two beautiful children and one luxurious country estate.