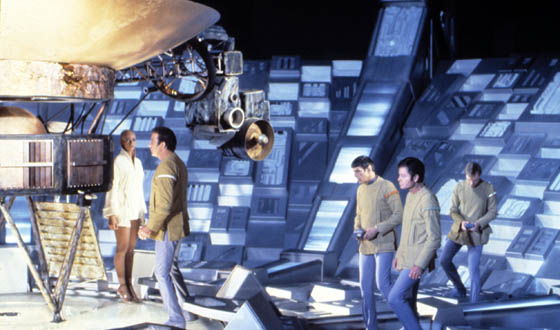 The path to the stars is winding and treacherous, and even the best spaceship needs a pilot. Sure, you can employ a shaggy Wookiee — if you can stand the smell. But what you really want is an artificial intelligence capable of flawlessly crunching and executing the necessary calculations. Of course, the dangers of such intelligence are all too clear: As the hapless astronauts aboard the Discovery One discovered when H.A.L. 9000 went loco in 2001: A Space Odyssey, and the crew of the U.S.S. Enterprise in Star Trek: The Motion Picture learned from the malevolent space cloud V’ger (née Voyager 6), NASA hardware has a tendency to evolve murderously.

Science fiction teaches us we need space probes that can evolve their thinking over the course of a mission, but keep their loyalty to their makers. And now, it looks like NASA’s and the European Space Agency’s probes will be programmed to do just that.

First, some background: NASA’s Voyager probes use gravity assists to leapfrog between planetary bodies — borrowing a planet’s gravitational field to fling them to their next destination. The benefits are a significant savings in fuel, but the drawbacks come in the form of mathematical complications: Launch windows can be missed, mechanical failures can occur, and solar flares can knock probes off course. And when you consider the fact that the trajectories for such gravity assists must be plotted months or years ahead of time, the problem becomes staggering.

The solution, says Ian Carnelli of the European Space Agency, is to program space probes with evolving genetic algorithms, which would allow them to pilot themselves. A space probe’s computer would constantly run simulated variations of the gravity assist maneuver, taking the most optimal simulated test runs and then “breeding” them with other test runs to calculate the planetary slingshot for any given circumstance.

The concept behind genetic algorithms is to create machines that can adapt to ever-changing circumstances the same way living creatures evolved over millions of years — only in a much shorter time span. Engineer Christopher MacLeod at the Robert Gordon University in the UK has developed a neural network comprised of a series of processing nodes. The actions the robot takes to respond to various stimuli are shaped by adjusting the importance of the input signals to each node. If an action works, the combination is stored. If it fails, the robot compensates. But the real question is, now that the algorithms are being put to work in spacecraft, will robot evolution include a predilection towards singing “Daisy Bell”?

Murderous, singing AIs aside, the potential for evolving genetic algorithms is (forgive the pun) astronomical: Carnelli has already run successful simulations of missions to Mercury via a Venus slingshot, and to Pluto via Jupiter. But the scientist says an actual probe programmed with artificial intelligence is still far off: “We are far from the days when a probe will have its route calculated by a [genetic algorithm] on the fly,” he says. “But we have gone a step closer.”