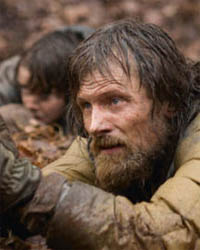 • While the whole “steampunk meets random geek franchise” is getting a bit tired, these steampunk Ghostbusters costumes actually make a lot of sense.

• First he ruined X-Men, and now Brett Ratner has his sights set on an adaptation of Youngblood, the Image comics series about a group of young superheroes. Erm, isn’t Josh Schwartz already doing something like that?

• Esquire magazine calls The Road “the most important movie of the year.” This, however, prematurely assumes the movie adaptation of Cormac McCarthy’s post-apocalyptic novel will actually come out this year…

• This Batman Lego cake makes us want to take it back in time and celebrate our tenth birthday all over again. Way better than the General Lee cake we had.

• This alternate ending to Back to the Future is kind of better than the actual ending, to be honest.

• Hayao Miyazaki (Spirited Away) offers a wonderfully rendered message of peace featuring characters from his Nausicaa and Lupin animes.

• The toy line featuring Disney characters as classic Star Wars characters is worth it for Donald Duck encased in carbonite. That Slave Minnie though? Just a big bowl of wrong.