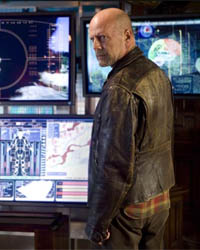 • The trailer for The Road makes the movie look like it has somewhat missed the plot of Cormac McCarthy’s post-apocalyptic masterpiece.

• Even though Fanboys was a commercial failure, the director’s still talking Fanboys 2

• According to the trailer for Bruce Willis’ new movie Surrogates, the future will consist of beautiful robotic versions of ourselves going out to do our bidding. That’s one way to deal with poor self-image.

• A huge new eidition of Terminator 2 called the “Skynet Edition” has now been released, and it seems to push the boundaries on what Blu-Ray is capable of.

• You only need to read seven books to learn perfect Klingon.

• Terminator Salvation is getting almost uniformly terrible reviews. Here’s another, courtesy of io9.