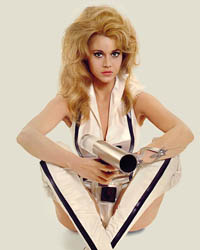 • Kirk Jr. meets Kirk Sr. in this Shatner Project video of the interaction between William Shatner and the new Star Trek‘s Chris Pine.

• SF Signal hosts another Mind Meld: What are the most realistic and most ridiculous uses of science in scifi film and television?

• Continuing the revisitation of Star Treks past, SF Signal examines the myriad Trek movies. You know, I don’t care what anyone says: I liked Nemesis.

• According to reports, Grindhouse director Robert Rodriguez is off the Barbarella remake, and maybe Predators, too. At least for the former, thank heaven.