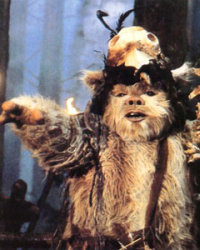 • io9 has an interesting theory that the scariest killer robots look like dead people. A zombie robot would send a chill down the spine but good.

• This USB drive that transforms into the Decepticon Ravage actually makes a lot of sense. Turning into a cassette isn’t exactly useful these days.

• Dollhouse terminated The Sarah Chronicles (in a way), so it seems only fair that Joss Whedon be trying to get his former Firefly co-star Summer Glau a role in Season 2 of his Eliza Dushku drama.

• Fun fact: David Lynch was supposed to direct Return of the Jedi. Here’s what it probably would have been like.Terrifyingly accurate.

• While gorgeous, this Star Wars AT-AT cake looks kind of difficult to eat. And geek cred notwithstanding, that is sort of the point of a cake.

• A Japanese astronaut tested out a “magic flying carpet” in space. This sounds like the set-up for every terrible anime series.

• These hand-carved G.I. Joe action figures are the best use of wood since the invention of the Lincoln Log.

• Maybe you can’t get away with declaring an “international talk like William Shatner day,” but voice actor extraordinaire Maurice (Futurama) LaMarche can.