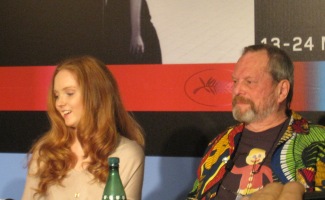 Friday morning at Cannes, the air was celebratory but mournful with the press screening of the late Heath Ledger’s last movie, The Imaginarium of Doctor Parnassus. Director Terry Gilliam (The Fisher King, 12 Monkeys) told the press corps how his production had to adapt to the passing of the star: “Everyone in the cast and crew was determined we would finish the film for Heath, so they worked longer and harder.” Co-star Andrew Garfield elaborated on the decision to have Jude Law, Colin Farrell and Johnny Depp play fantasy versions of Ledger’s character to finish the flick: “It was a very tricky situation we were only able to get through because we were all so touched and moved by Heath.”

But there were other things to talk about beyond Ledger’s tragic passing; I asked Gilliam and his cast — including Garfield, Lily Cole (pictured above with Gilliam) about the challenges of shooting the fantasy sequences, which incorporate CGI and extensive special effects. Gilliam noted that there was some reality under the fantasy, even when Cole had to be hung from wires to create the illusion of soaring flight: ‘We tried to build partial sets, so there’s something to touch and feel and fall down on … [but] Lily got stuck in blue spaces in air.”

Garfield mocked Gilliam even as he praised him, saying the director’s skill made the challenge of acting opposite effects less daunting: “The fact that you’re in a room with one of the greatest imaginations — God, no, he’s an awful director — it’s inspiring.” And Cole noted how the technical concerns “made the process quite interesting, because you’re using your imagination — seeing things that aren’t there, not seeing things that are.”

Finally, Gilliam explained how Doctor Parnassus came from his own desire to do something fresh: “I wanted to do something original instead of adapting a book … and I tried to make a compendium of everything I was interested in, running through my drawers for all these ideas and images, starting with the image of a horse-drawn cart being pulled through the streets of a modern city.” Doctor Parnassus premieres out of competition tonight; the movie is still seeking distribution in the U.S.