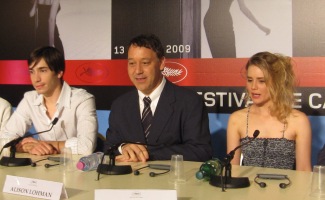 On a bright Thursday afternoon a few hours after the dark-of-night red carpet premiere of Sam Raimi’s Drag Me to Hell (showing out-of-competition here at Cannes), Raimi met the press alongside stars Alison Lohman, Justin Long and more. “I first came here in Cannes around ’81 to try and sell my first Evil Dead film,” Raimi noted, “and no American distributor would touch it with a ten-foot pole. The first public showing (Evil Dead) was at the Cinema du Rex in Paris and it was the best horror crowd I’ve ever seen. And now I’m back in the big house. I’m honored to be here.”

I asked Raimi if, after the Spider-Man movies and more serious dramas like A Simple Plan and For Love of the Game, he had to re-teach himself how to shoot horror movie material. “I feel like I’m still learning it; I took what I’d learned on my earlier films and applied to a new script and better actors,” he said. Raimi also contrasted Drag Me to Hell with working on the Spider-Man films: “[Directing Spider-Man] is like conducting a symphony orchestra; this film is like playing with a jazz quartet… It’s a blast.

I also asked the actors what their most fun moment on the shoot was. Lohman laughed at the question: “Well, considering that my character is tortured… the most fun was working with the actors and Sam. On the page, [the script] says ‘Mrs. Ganush [the gypsy woman played by Lorna Raver] suckles Christine’s chin.’ I figure [Raimi was] just filling out the script — and then it’s a whole day [of shooting] that!”

For her part, Raver loved fighting with Lohman; her favorite day was “the fight in the car … I don’t know what that says about me.” And Long, as Lohman’s loving boyfriend, noted that he didn’t feel like he was in a horror movie: “I treated it more as a romance,” he explained. As to what similarities there were between Evil Dead and Lars von Trier’s controversial Cannes entry, Antichrist, Raimi scored with a wicked joke. “I haven’t seen [Antichrist]; I’d love to see it… and so would my lawyer.”