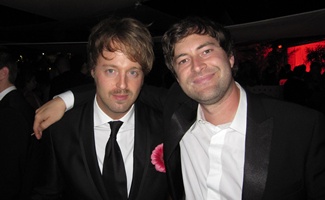 Several days into the 2009 Cannes Film Festival, we’re at the midway point — and, appropriately enough, I ran into Humpday stars Mark Duplass and Josh Leonard on Saturday night. After a warm reception at Sundance, Lynn Shelton’s scruffy indie about two male friends who consider shooting a sex tape for a local adult film competition — with the caveat both are straight — was asked to appear as part of the Director’s Fortnight here in Cannes. I had the chance to talk with Duplass (right, alongside co-star Leonard) about how it felt to find out the movie was invited to Cannes…

“We found out a few months before the official announcement came in. It kind of blew my mind, to be honest. This is a tiny, tiny movie made with friends… the fact that it’s come this far is kinda surreal still.”

Surreal, but fortunate; I asked Duplass if he’d had the chance to hit any other events or red carpets: “We’ve done everything except get on a yacht. And, I’ll be damned if I leave this country without getting my ass on a yacht. I’ll swim out to one if I have to.” When asked if it was odd to be here with a scruffy indie pic, Duplass replied: “Who you callin’ scruffy? Just ’cause I’m willing to swim to a yacht

for some free beer and a little emotional validation?”

All kidding aside, Duplass explained that the Humpday‘s reception was overwhelming: “People are loving it. We were all concerned that the highly improvised American nature of the film wouldn’t translate well overseas, but so far the international audience has really taken us in. Everywhere we go, Josh and I are getting mobbed by fans.”

Along with screening the film, Duplass and Leonard are also trying to have the whole Cannes experience before they have to head back home. I asked Duplass if he had any favorite memories. “Josh almost got arrested trying to get into a big film premiere. Twice,” he said. “That, and the four minute standing ovation we got for the premiere of Humpday. Or, maybe it was the 75 year-old Frenchman (who) asked me in a Q&A if Josh and I were homos in real life. Tough call… it’s been a good few days.”