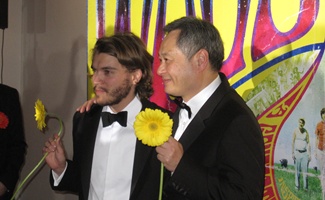 At a press luncheon for his new film Taking Woodstock, director Ang Lee explained how his choice to look back on the Age of Aquarius with laughter was a conscious one: “I’ve been making serious movies for the past thirteen years; I was drained from those movies… I thought I’d be happy making the movie.” He and his cast certainly seemed happy to be here after the black-tie premiere and afterparty Saturday night. Star Demitri Martin was still taken aback by the dress code and the experience: “The red carpet was ridiculous last night. The last time I wore a bow tie was when I was a waiter in my family’s diner in Beechwood, New Jersey.”

Martin explained how Lee had him watch very specific films to get in character to play Elliot Tiber, the motel-manager who wound up playing a pivotal role in the 1969 Woodstock concert: “I watched Bob & Carol & Ted & Alice, I watched The Graduate, I watched Midnight Cowboy.” Co-star Emile Hirsch also had specific instructions about what to watch to play a Vietnam veteran struggling with the past in his climactic scene: “Ang described [the tone of the scene] as ice beginning to thaw, like the scene with Walken in The Deer Hunter where he’s just beginning to recognize De Niro.”

Screenwriter James Schamus knew that Taking Woodstock was facing a challenge in being taken seriously here: “Going to Cannes with a comedy is pretty much putting a target on your back.” But Taking Woodstock was also a chance for Lee to look at the counterculture he experienced through movies in his native Taiwan before moving to the U.S. at age 23: “I saw Woodstock when I was 14 … I learned about America from the media … and I feel like I missed the show.” And, Lee offered, Taking Woodstock tries to wrap around the contradictions of the time: “Woodstock took place at the same time as the Manson murders.” But for all of the theories and ideas flying around the air during the luncheon, the mood was still upbeat; as star Martin explained, “Whatever people think of the film, it’s still the French Riviera.”