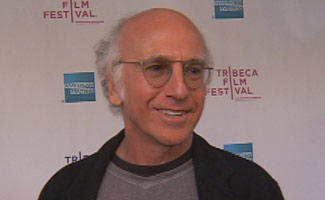 So we’re on the red carpet for the premiere of the Farrelly brothers’ documentary about baseball pitcher Luis Tiant, Lost Son of Havana, and along comes Larry David. He’s a friend of the Farrellys and a baseball fan, which makes him want to see the film, but doesn’t necessarily make him want to do the press line. Dragged into a photo op with Bobby and Peter Farrelly and Tiant, he protests, “But it’s not my film!”

David then turns around, and sees a NY1 cameraman, who is kind of a one man band — he does the interview and he holds the camera. Larry is astonished.

“This is something I’ve never seen before! This is really unusual.”

The cameraman tries to ask Larry a question about Curb Your Enthusiasm‘s upcoming seventh season, but Larry is stuck on the set-up. “Is this because of cutbacks?” he asks. “That’s a shame.”

Then he offers a solution.

“I’d give a friend — or even a guy on the street — ten bucks to hold the camera.”

NY1 is not amused.