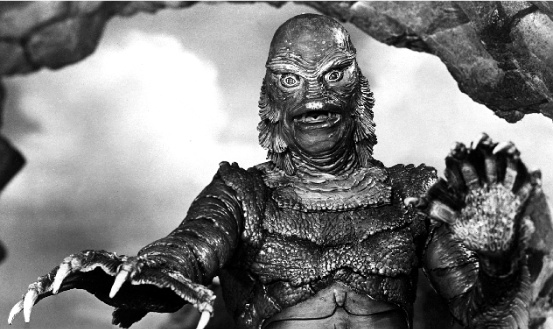 I love learning. I know that’s nerdy and undermines my massive cool cred (I do have cool cred, right?), but on my shelves The Haunting of Hill House and Resident Evil tie-ins play nicely with books about black holes and The Audubon Guide to Insects and Spiders. And at the crossroads of horror and learnin’ lies a thought: Wouldn’t a field guide to B-movie monsters be handy for determining whether the giant hairy thing shambling your way is a bigfoot, a yeti or Robin Williams? And so I bring you part one of my cheat sheet.

BIGFOOT (aka Sasquatch)
Habitat: Pacific Northwest.
Description: Hairy, ape-like, 6 to 10-feet-tall, 500+ pounds.
Cinematic career: Gave the ’70s horror cinema Sasquatch Fever, beginning with the docudrama Legend of Boggy Creek (1972), which immortalized bigfoot’s stinkier, kitten-scaring, hog-eating Arkansas cousin. Other notable films include Sasquatch: The Legend of Bigfoot (1977), The Capture of Bigfoot (1979) and 1980’s awesomely sleazy Night of the Demon, a thing of flashbacks within dreams inside flashbacks, like a set of fur-covered, blood-soaked Russian nesting dolls.

GILL MAN (aka Creature from the Black Lagoon)
Habitat: Amazon Rainforest
Description: Amphibious, scaly and vaguely humanoid, webbed feet and hands.
Cinematic career: Swam into the hearts and minds of horror fans in 1954’s The Creature Walks Among Us (1956). More recently spotted in 1987’s The Monster Squad and on my desk, in phosphorescent action-figure form.

THE BLOB
Habitat: Small Town, USA
Description: Blobby.
Cinematic Career: The Blob came a-crashin’ into Pennsylvania via meteor in 1958, where it terrorized a young Steve McQueen. In 1972 Larry “JR Ewing” Hagman directed Beware! The Blob, which found the Jello-like alien feasting on hippies and hobos instead of squeaky clean teens. The loose 1988 remake pitted future Saw star Shawnee Smith against the gelatinous glutton.

GIANT ANTS
Habitat: Florida Keys; New Mexico
Description: Ants. Supersized.
Cinematic Career: Helped inaugurate a wave of nuclear-scare pictures with 1954’s Them! , whose lessons about the perils of radioactive waste went unheeded; staged a comeback in Bert I. Gordon’s 1977 schlockfest Empire of the Ants . If radiation poisoning is the price of seeing big bugs chomp on Joan Collins, so be it.

COLOSSAL MAN
Habitat: Southwestern United States
Description: Colossal and radioactive.
Cinematic Career: I believe what’s good enough for ants is good enough for us, and genre hack (which I mean lovingly) Bert I. Gordon agrees. Exhibit A: Poor sap Lt. Col. Glenn Manning, in the wrong place at the wrong time and wound up an oversized, radioactive dude. Remember: I’ve read some smart books, so trust me: The Amazing Colossal Man is 100 percent scientifically accurate. Manning returned in 1958’s War of the Colossal Beast , at least 35 percent more disfigured and super angry. If only someone had introduced him to the 50-Foot Woman!

Watch War of the Colossal Beast right here at AMC and keep this field guide close to hand. If it saves just one life, my work will not be in vain.