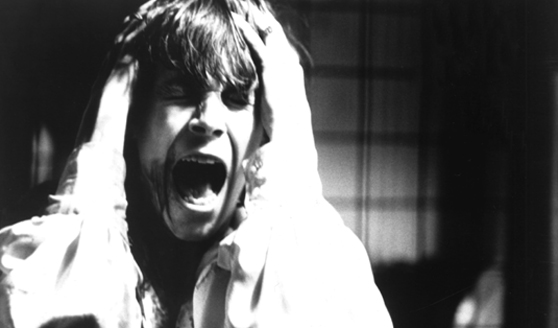 One reason I enjoy writing recommendation columns (like this and this) is that it creates a love-in among us horror fans; I suggest a movie, you suggest a movie, we’re all satisfied with spreading the gospel and learning something new. Kind of like those “leave a penny, take a penny” dishes on store counters… except bloodier. One hopes. Anyway, the imminent (and long-awaited) DVD release of Slaughter High prompted a list of eight slasher flicks you may not have seen, but perhaps should…

1. Alice, Sweet Alice (1976): Also known as Holy Terror, this marks the big-screen debut of a preteen Brooke Shields, and what a debut it is: She’s choked with a first-communion candlestick, stuffed inside a storage bench and set on fire. Yeah, Alice, Sweet Alice is that kind of movie — heavy on grotesque Catholic imagery with a coating of sleaze. It’s also, at times, truly frightening. If there were any justice in the horror world, the plastic mask and raincoat worn by Alice‘s killer would be as iconic as Jason’s hockey mask.

2. He Knows You’re Alone (1980): I’d call this film subtle, except that it features a head in a fish tank. Still, there’s an air of quiet maturity throughout. You may even find yourself caring about the characters! Don’t worry, though, there are plenty of great scares as a jilted groom-to-be stalks young brides before their weddings. Of particular note is a movie-theater scene heavily aped by writer Kevin Williamson in Scream 2 .

3. Terror Train (1980): A killer stalks med students partying on a train that’s barreling through an icy winterscape… sounds good, right? Terror Train is all that and more — meaning it features scream queen Jamie Lee Curtis and magician David Copperfield! A sweet melding of all the slasher staples, Terror Train also features an unusual locale and magic tricks. They sure don’t make ’em like this anymore.

4. The Funhouse (1981): This one seems to get overlooked in discussions of slasher movies… and, for that matter, in discussions of movies directed by genre godfather Tobe Hooper. I don’t know why, because The Funhouse is downright creepy — being locked in a carnival funhouse after closing is a terrifying notion, nevermind being locked in and chased by a hideously deformed mutant killer.

5. Happy Birthday to Me (1981): This is one of the few remaining slashers that hasn’t been rumored for a remake, and I’m glad. There’s something so early ’80s about the snobby preps who make up the movie’s “Top Ten” (popular kids who wear matching scarves and get offed in ridiculous ways) that modern-day counterparts would pale in comparison. The flick features brain surgery, twists atop twists, and a shish kabob-flavored murder sequence that’s one of the more memorable in the genre.

6. The Prowler (1981): A true underrated slasher gem, The Prowler is as gory as it is horrifying, thanks to the work of FX maestro Tom Savini. The plot is superficially similar to My Bloody Valentine: Decades after some teens are brutally murdered at a small-town dance, the festivities are resurrected. Of course the killer also returns, and hilarity ensues. Wait, not hilarity — I meant stabbing and poking and death-making.

7. Slaughter High (1986): At last, this glorious cheese factory is available on DVD. Like Terror Train, it’s all about the deadly revenge of the nerd: The kids at Doddsville County High bullied poor Marty right over the edge of sanity, and ten years later he pays them back elaborately at a reunion. Everything is over the top, from the plentiful gore to the hammy performances by actors 20 years too old to play high schoolers. Slaughter High may not be to everyone’s taste, but I’m glad it’s now available so you can decide for yourself.

8. House of Wax (2005): OK, I know including this one may induce some of you to bust out torches and pitchforks. I can’t believe it’s here, either. But the weirdest thing happened the first time I saw HoW: I actually liked it. Sure, it takes a while to get going and then stays too long. Yes, it features Paris Hilton and a bunch of jerk teens running around a house literally made of wax. And true, the less said about the CGI-riddled finale the better. Still, it features plenty of gore and plenty of fun.