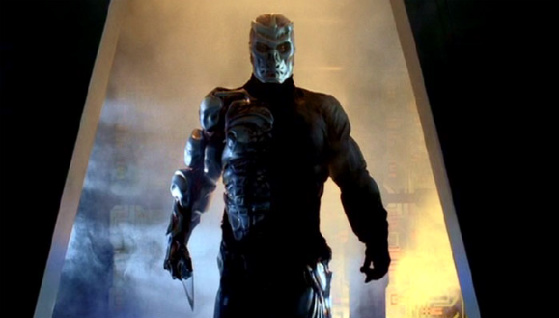 Have you ever noticed that once the sun goes down, the sky turns black and there are glowing white dots all over it? Well friends, brace for some science: Those dots are called “stars,” and the blackness in which they float is actually outer space. It’s true! In fact, you may remember outer space from its appearance in such films as Alien, Event Horizon and many lesser features.

Alien and Event Horizon are shining examples of what happens when horror and scifi mingle like randy singles: The former is a slasher movie with a homicidal monster from another planet, the latter essentially a haunted house picture with an out-of-this-world setting. But for truly ridiculous horror films set in space, look to franchise efforts that head skyward when the terrestrial idea pool dries up. These three spaceballs, for example…

Hellraiser introduced horror fans to the bloody, sadomasochistic side of human desire. His demonic Cenobites were unlquely disturbing creations, so Hellraiser‘s success naturally demanded sequels featuring Pinhead and his posse of leather-clad weirdos. Like all franchises, the series has had both highs and lows, and the fourth installment, a time-hopping journey into the genesis of the infamous puzzle box that calls forth the Cenobites, falls somewhere on the spectrum’s lower end. It begins on a space station in the year 2127, then moves first to 18th-century France and next to present-day New York. Trust me: It’s exactly the convoluted mess you’d imagine. Pinhead’s menace and mystery are completely missing, and what’s left is some sort of bedazzled Shakespearean castoff, stroking pigeons and blabbing endlessly. No wonder directing credit goes to Alan Smithee, the pseudonym favored by directors driven to disavow their work.

Leprechaun 4: In Space (1997)
I’m not gonna lie to you: Leprechaun 4 is a terrible, terrible film. But I love it, and I’m only a little bit ashamed: There are good times to be found in this delightful tale of space marines who go to some planet to do something or other and run afoul of the titular Leprechaun, who’s on the planet to marry a space princess for some reason or another. That all makes perfect sense, doesn’t it? Look, it really doesn’t matter; What matters is the bad CGI and the fact that the space princess wears glitter and yellow eye shadow, as I always suspected alien broads would. Ostensibly a horror comedy, Leprechaun 4 fails on both fronts so spectacularly that it’s a joy to behold, a shining example of film so bad it’s good. If nothing else, it’s worth suffering through for the ending, in which the Leprechaun’s giant, disembodied hand floats by the ship and flips the space marines the bird. I don’t think I’m overstating things when I say it’s a high point in the history of cinema.

Jason X (2002)
In case you didn’t know, the “X” indicates that it’s the tenth film in the Friday the 13th series. Ten. Ten film a masked wackadoo killing horny teenagers (OK, nine films about him and one about his mom). I’m not surprised Jason wound up in space… I’m surprised it took ten movies to get him there. Could Jason X be anything but absurd? Of course not: You’re dealing with a cryogenically-frozen Jason Voorhees who thaws out aboard a ship in the 2455. Years on ice have done nothing to cool his murderous ways and he sets about killing everyone in sight and eventually becomes uber-Jason, a cyborg psycho complete with shiny silver mask. And Jason X isn’t even the series nadir; in fact, if you’re willing to check your brain at the door it’s an awful lot of fun. Uber fun, even!

The idea of taking horror franchises into space appeals to me because it’s ludicrous: Talking about uber-Jason with a straight face is almost impossible, so I say bring it on! I want to see Freddy Krueger haunt the nightmares of astronauts on Elm Street One. I want a cryogenically-frozen Norman Bates to thaw out and open the Bates Lunar Motel. I want Saw X to feature some hapless Jigsaw victim trying to chew his way out of a trap before a comet hits him in the face. For my money, these suggestions seem like natural series progressions.