If killin’ were easy, everyone would do it. But there’s more to being a serial killer icon than picking up a weapon and slashing. Think of the greats: Freddy Kreuger? Style. Michael Myers? Born to kill. Jason Vorhees? Gets ‘er done. Meanwhile, the wannabees rack up failures the way I collect McDonald’s Monopoly pieces, except that nobody gets a prize. Which brings us to the Hall of Shame Epic Fail (Slasher Division) and my first batch of nominees.

These guys only wish they were lean, mean killing machines, but they’re not. Not even close. How do they fail? Let me count the ways.

Pennywise from Stephen King’s It : Clowns scare the you-rine out of me, and Stephen King’s novel really scared the you-rine out of me. So Pennywise should be really, really scary, right? Wrong, because in the end you’re looking at the screen and thinking, “Dude, it’s a clown.” A supernatural devil-clown from Satan-land, but still a frickin’ clown. Check out this clip and decide for yourself. But the main reason Pennywise is nominated is that he’s a failure. He got three of seven targets? He left four peeps alive? Pennywise… how about Pantywaist, ya nancy. You get the “Leaving Too Many Alive” Epic Fail.

Scream Dudes: For a truly pathetic display of murderous ineptitude, look no further than the Scream series. It’s one thing to need multiple shots or back up to take down Arnold Schwarzenegger, But three shots at Neve Campbell? She’s not exactly the poster girl for chewing iron and crapping nails; failure to kill her is sufficient reason to lose your Serial Killer Local 318 card. But there’s more: She killed you. Three times! How about you fire the discount tailor and the “Helloooooooo Sydney” voice coach, then invest some time in MMA Boot Camp? Scream Dudes, you get the “Repeatedly Can’t Beat Up a Girl” Epic Fail.

The Gingerdead Man: Yeah, he’s a killer cookie. Don’t believe me? Click on the image of Gingerdead below to see a clip, see for yourself: 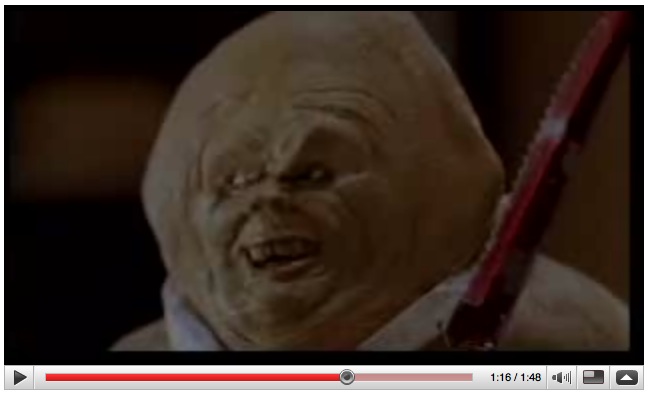 Gingerdead racks up a good body count, but makes the ballot for being downright silly. If he were man-sized, maybe I could buy it. But he isn’t, so all the murders are clearly camera tricks and special effects. Cue the “Done With Mirrors” Epic Fail.

Dr. Burke from Asylum (2008): Where to begin with this monsturd of a movie? Burke was a lobotomy-happy doc who lived to jam needles up his patients’ noses, among other unpleasant procedures. His patients rebelled and he became a supernatural murder machine. Burke makes the list not only because his patients killed him, but also because he gets whacked again by a girl so delicate she makes Neve Campbell look like a linebacker and because he has  the lamest killer signature quip ever: “Give, me your suffering!” Whatever. Dr. Burke, you are recognized for the “Killers Don’t Wear Stethoscopes” Epic Fail.

And there you have it. Dear Reader, I will win no awards for this column; copious quantities of cheap scotch may even help me forget it. In the meantime, dull our shared pain by picking a “winner” and/or sharing your thoughts about pathetic serial killers.

New York Times best-selling author Scott Sigler writes tales of hard-science horror, then gives them away as free audiobooks at www.scottsigler.com. His latest hardcover, CONTAGIOUS, is in stores now. If you don’t agree with what Scott says in this blog, post a note in the comments section below. Please include all relevant personal information, such as your address and what times you are not home, so Scott can come visit and show you his world famous “Chicken Scissors.”