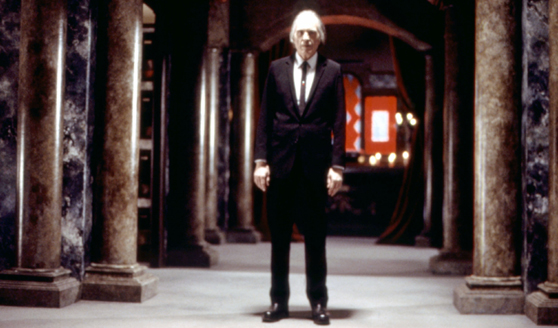 As a child of the ’80s, I’m giddy over the reboots of Friday the 13th , Halloween, and the upcoming A Nightmare on Elm Street (with a Bad News Bear as the new Freddy Krueger). Three of the Fearsome Four — Freddy, Michael Myers, and Jason — are back on the silver screen or headed that way, leaving only Chucky still stuck in the Reagan era.

But why stop with marquee names to turn a new-century buck? Why limit it to the major leaguers when there’s so much minor league talent out there waiting for a shot at the bigs? That’s right, Dear Reader, it’s time for Uncle Scottie’s Talent Scouting Emporium to distribute its preseason picks for movie killers who should get top-name play. These guys have toiled away in the triple-A horror leagues for far too long. Spring training is afoot, so let’s see who should get a swing at bat…

1. Leprechaun
Frankly, the entries in the Leprechaun series are so terrible they redefine the “so bad it’s good” tagline. But, dammit, I say Leprechaun is ready for his shot at the majors. Come on, Michael Bay, can you just add this to your list of money-hose remakes? Verne Troyer is looking for work. Combine his well-known brand name with this character’s nostalgia factor, spend some Gs to get a cameo out of Jennifer Aniston (who made her acting debut in the 1993 original), release it on Saint Paddy’s Day 2011 and you are guaranteed B-A-N-K. Yes, this is a humorous column, but I’m serious about this shiz. Guaranteed No. 1 at the box office, so hook it up, Michael!

2. Candyman
Clearly, Candyman is the killer in this list who was closest to breaking out as a marquee horror icon. The numbers back up that claim, too, as the TriStar Pictures flick grossed $25 million on a budget of $8 million — a solid enough profit to kick out two sequels. Granted, Candyman: Day of the Dead and Candyman: Farewell to the Flesh didn’t fare quite as well, but I’ve got three words for you: Michael Clarke Duncan of The Green Mile fame. He’d be the perfect “holy crap this dude is so huge I think I just messed my pants” replacement for Tony Todd, the awesome original Candyman. Plus all the marquee killers are as white as a Bear Stearns board meeting, so we need some people o’ color in this lineup (no, leprechaun green does not count, Southie, so go root for the Celtics and just calm the hell down). Lastly, the movie has already earned its nostalgic props in the form of the South Park episode “Hell on Earth.” What more cred do you need than that, yo?

3. The Tall Man
Trapped somewhere between ’70s legend and ’80s obscurity, Phantasm ‘s Tall Man is well-known among horror officianados but not exactly a household name. The Tall Man is ready for his shot — he’s batting .368 and averaging a dinger every three games, so step up to the plate, brah. Who could play the updated version of such a creature? Well, the Tall Man isn’t just tall, he’s old and gaunt and spooky and wrinkly, so it needs to be someone in his 60s. At the same time, there should be multiple flicks in this series reboot, so the actor should be in his early 60s so that he doesn’t croak before that fine-ass sequel scratch materializes. Tall, old, but not that old: How about the 7-foot-1-inch Peter Mayhew of Chewbacca fame, or 6-foot-6-inch Fred Dryer, the lead actor in ’80s cop show Hunter? Both fit the bill, both bring that built-in ’80s nostalgia, and both could put the Tall Man back on the map.

4. Stripe
Let’s get this over with, shall we? Everyone wants a Gremlins remake. Everyone. You, your best buddy, your boss, that old lady down the street with seventeen cats, your mechanic who smells like week-old Big Macs… everyone. The laughing, evil-eyed Stripe is way overdue for another turn in Tinseltown, but please please please, can whoever takes it on use real puppets? Get the Re-Animator to bring Frank Oz back from the dead if you have to, get Whoopi Goldberg to channel Stan Winston if need be — just give us an actual animatronic Stripe, not a crappy CGI Yoda with a mohawk, hmm-kay? The puppet action was part of the fun of this brilliant cult classic. Yes, computers are awesome, we get that, but some things are just better as tangible physical objects of doom.

You’ve Got the Call…
At least one of these cats is getting called up to the bigs. It’s a lock, considering the insane profits turned by the Halloween and Friday the 13th reboots. Personally, I’m pulling for Stripe. Who am I missing, Dear Reader? Are there other B-list horror icons you think should cash in on Hollywood’s character bailout plan? Write them in in the comments below.

New York Times best-selling author Scott Sigler writes tales of hard-science horror, then gives them away as free audiobooks at www.scottsigler.com. His latest hardcover, CONTAGIOUS, is in stores now. If you don’t agree with what Scott says in this blog, post a note in the comments section below. Please include all relevant personal info, such as your address and what times you are not home, so Scott can come visit and show you his world famous “Chicken Scissors.”