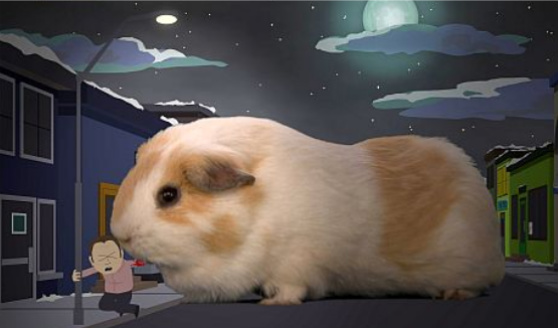 The images above are from the 1999 movie South Park: Bigger, Longer & Uncut. What? You don’t consider South Park a bona fide member of the horror community? Well hey, just because it’s a satirical cartoon doesn’t mean it’s not contributing to our collective nightmarish community, OK Budday?

Pandemic and Pandemic 2: The Startling
Season 12, Episodes 10 & 11
A classic mash-up of Invasion of the Body Snatchers -style alien doppelganger plots and the  the well-worn “awakening an ancient evil” storyline, all topped off with a “shakey cam”  spoof of Cloverfield, this two-part episode packs in a wealth of horror references. And instead of a monster design that makes little biological sense (it’s kind of large for an amphibian no one so much as caught a glimpse of until it decided to stomp New York, no?), South Park goes straight for the ultimate terror: Giant guinea pigs.

Scott Tenorman Must Die
Season 6, Episode 4
Possibly one of the best episodes in South Park history, this one is a horrific slow-burn of a brutal revenge tale. Cannibalism is horror, no matter how you slice, dice or mince it up into a nice spicy chili. Funny, sure. But if you take a step back and just look at the plot of this episode, you’ll be forced to agree it’s some major-league horror. Oh, what? You don’t agree? Well, screw you, hippie, because the majority sides with Uncle Scottie. “Scott Tenorman Must Die” is the highest fan-rated South Park episode over at IMDB.com, which just goes to prove that chopped-up parents are a sure-fire crowd pleaser.

The Ungroundable
Season 12, Episode 14
Never ones to miss a chance to rip on current cultural idiocy, the show takes a good look at the Hot Topic vampire phenomenon Stephanie Meyer unleashed with her Twilight series. Meyer’s books (and the 2008 movie Twilight, based on the first novel in the series) turned traditional vampire mythology on its head, something I covered in the HorrorHacker post Scott Sigler Ain’t Afraid o’ no Vamps. This episode doesn’t so much flay Meyer’s captivating and best-selling vampiric vision as much as it does the tween fad it spawned, a plague of sparkly vampires who buy their goth rip-off clothes at the local mall. South Park‘s put-upon Butters tries to reconcile the classic concepts of vamps (crosses, mirrors, garlic, et al.) with Twilight‘s new “spiritual being” take.

Marjorine
Season 9, Episode 9
Without a doubt, this is South Park‘s most cringe-inducing, “oh my God they did not just do that” horror-related episode ever. In order to infiltrate the girls’ slumber party, the boys fake the death of one of their own (poor Butters, always the victim). How? By staging a suicide jump off a tall building to attract a crowd (including Butters’ parents), dressing up a pig carcass as Butters and tossing the carcass to the ground, where it splatters all over said ‘rents. I know this is a TV show. I know these are just cartoon characters. But day-ummm, that part had me looking through one eye, simultaneously laughing and stammering “no way!” And the good times don’t end there… not at all.

Butters’ father gets a visit from someone who tells him that, “sometimes, dead is bettah,” a reference to the classic Pet Sematary line delivered by Fred Gwynne. Also a la Pet Sematary, the pig corpse mistaken as Butters is entombed in an old Indian burial ground, so when Butters returns home his parents assume he’s a zombie. They chain him up in the basement and feed him freshly killed traveling salespeople, when all the kid wanted was some damn Spaghetti-Os, for God’s sake! Hysterical, disturbing and also full of horror movie references, including nods to The Craft (1996), The Gate (1987) and the classic short story “The Monkey’s Paw” (written in 1902; really reaching back for that one), “Marjorine” is a treasure-trove for genre fans.

Part 2?
Those four episodes are just the tip of the South Park horror iceberg… what am I missing, Dear Readers? Leave a comment and name your favorites. I’ll summarize the most popular ones in part two of “The Horror of South Park,” which will run in August.

New York Times best-selling author Scott Sigler writes tales of hard-science horror, then gives them away as free audiobooks at www.scottsigler.com. His latest hardcover, CONTAGIOUS,
is in stores now. If you don’t agree with what Scott says in this blog,
post a note in the comments section below. Please include all relevant
personal information, such as your address and what times you are not
home, so Scott can come visit and show you his world famous “Chicken
Scissors.”