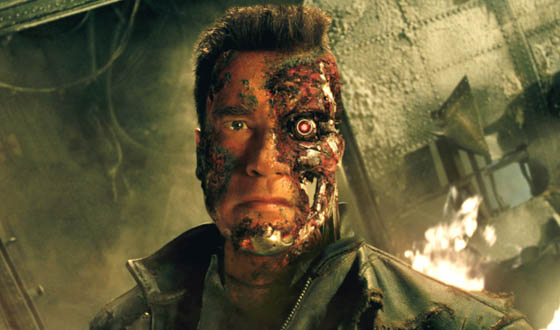 If there’s one thing that Hollywood and science fiction have in common, it’s that they’re both improbably filled with beautiful people. Of course, Hollywood actors and actresses would never be so vain as to refer to themselves as perfect specimens of humanity… but in scifi that’s just what they’re called. And no one is better at stepping up to the pedestal of future perfection than these five actors. Whether or not you think they’re flawless in real life, on the silver screen they can’t be topped.

With his receding hairline and wiry frame, you’d hardly think of Law as lacking in flaws. But time and again he’s shown that charm, an English accent and piercing blue eyes will get you anywhere. In Gattaca (1997), Law plays a genetically perfected human dealing with a crippling swimming injury — and yet he’s still able to pass along his DNA samples to the imperfect Ethan Hawke. In 1999, Law infuriates Matt Damon’s title character in The Talented Mr. Ripley by having the perfect girlfriend and the perfect life. Then there’s Artificial Intelligence: AI (2001), which finds Law trying his hand as the perfect sex-bot. Though all his characters have an internal flaw, the actor excels at pushing past that and showing that perfection is merely skin-deep.

As a fashion model, Jovovich is no stranger to having her body treated as the epitome of physical perfection. But in The Fifth Element (1997), Jovovich literally embodies it as the physical representation of human love. Then there’s the Resident Evil series (2002, 2004, 2007 ), which slowly reveals that Jovovich is… you guessed it, the perfect specimen of humanity, created by the evil Umbrella Corporation using the usually zombifying T-Virus. Clearly, no one in either of these movies has ever heard her sing, but no matter: I’d gladly suffer zombie-dom to create my own personal Milla.

Like the rest of the world’s moviegoing populace, we’re going to ignore the “You’re not the first One” shenanigans of the Matrix sequels, and focus instead on the One himself, Mr. Keanu Reeves. Though Neo is still fallible on his human side, by the end of The Matrix (1999) he’s achieved programming perfection — the dude can even fly. Taking a step back a few years, Keanu plays the Buddha, Siddhartha, in Little Buddha (1993). Again, he does not achieve physical perfection, but Siddhartha does reach enlightenment — a state of spiritual perfection all Buddhists strive towards. In the remake of The Day the Earth Stood Still (2008), Reeves portrays Klaatu, an alien who comes to Earth to chastise us about our imperfections and create a more perfect planet — namely by killing us all. I guess perfection can really give you a God complex.

Once again, we’ve got a genetically perfected human from Gattaca , but this time it’s in the form of Uma Thurman. Her only flaw in this case is falling for the “wrong” guy, Ethan Hawke. But we’ve already proven that you can be perfect on the outside and still hide a flaw or two. There is an exception, however, and that’s Thurman’s role as Venus in The Adventures of Baron Munchausen (1988). In Terry Gilliam’s fantasy, Thurman plays the most perfect being you can find: A Goddess, and one that not even Keanu could best.

Who’s more perfect than the Governator himself? Scwarzenegger has been all about having the perfect body since 1977’s Pumping Iron. But it’s in the Terminator trilogy ( 1984 , 1991 , 2003 ) that he becomes the perfect killing machine. Twins (1988) goes one step further depicting the perfect Arnold not as a machine, but a man constructed from the sperm of six different fathers. And then there’s The 6th Day , which has Arnie going through the rite of passage all good action stars must one day face: Battling your own double. In this case, a cloned version of Schwarzenegger is even better than the original.

Click here for a complete schedule of Terminator 3: Rise of the Machines on AMC