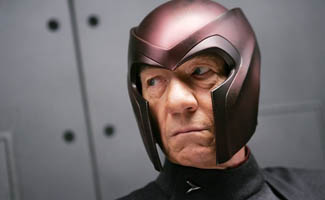 Science fiction teaches us that genetic mutation is the surest way to grant human beings superior abilities. What, after all, would the X-Men be without an extra genome here and there? But as scientists are learning in their studies of so-called “Junk DNA,” mutation can also do the exact opposite.

Junk DNA are aspects of our genetic structure that have remained dormant for millennia, deactivated through what’s called a “nonsense mutation.” You’d think that such DNA would be the least essential part of our genetic structure. But in fact, activating it may hold the key to allowing humans to have a built-in immunity to HIV. Scientists Nitya Venkataraman and Alexander Cole have discovered that by using a compound called aminoglycosides, they can essentially “trick” human subjects’ DNA into reactivating the junk genome, which then starts producing retrocyclin — a protein proven to prevent HIV in monkeys.

One mutation shuts off the immunity, another mutation turns it back on. While it’s certainly intriguing to think that the ability to prevent HIV predates the existence of the virus (the first known case of HIV was in June of 1981), the most fascinating aspect of Vankataraman’s and Cole’s experiments — published this week in PLoS Biology — is the possibility that the genetic potential for “abilities” already exist inside of us.

What kind of future could scientifically-induced mutation create? In Lawnmower Man , Pierce Brosnan unlocks Jeff Fahey’s latent potential using a combination of drugs and virtual reality, which leads to an evil genius running amok. Alternatively, Gattaca presents a future society almost entirely controlled by a gene-ocracy — surely it’s not a stretch to imagine aminoglycosides one day activating and de-activating our DNA to tailor the perfect human specimen. And then of course there’s X-Men: The Last Stand , an almost mirror image of the Junk DNA scenario where a “cure” for the mutant gene is invented to suppress the abilities of the so-called X-Gene.

Though the Junk DNA experiemtns are not a done deal by any means (they’ll be in testing this one for years), the scientists do believe it represents more than an AIDS vaccine; it’s a way to make humans more perfectly suited to our ever-changing environment. Whether that means creating the perfect human, or the perfect superhuman, is too early to tell. But it might not hurt to ready your superpower wish list, just in case Dr. Venkataraman needs any volunteers.