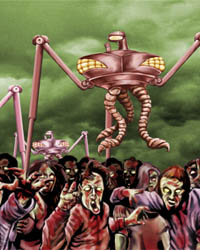 • Swine Flu pandemic got you down? Science fiction teaches us that it could be much worse.

• And speaking of Swine Flu, fatalities don’t just include people and pigs: The disease is also delaying the premiere of X-Men Origins: Wolverine in Mexico.

• io9 talks to Leonard Nimoy about his role in the new Star Trek movie. It’s a fluff piece, but it’s always nice to hear Nimoy talk about Spock.

• An even better zombie mash-up idea than Pride and Prejudice: War of the Worlds… with zombies!

• Joss Whedon says Dollhouse isn’t dead yet, but fans need to pour out support for the show to survive.

• Alan Moore talks about the ’80s comics scene and, unlike his biggest fans, refuses to take credit for the renaissance.

• Even J.J. Abrams thinks Star Trek’s lens flares are ridiculous, but at least he’s got a good excuse: “I love the idea that the future was so bright it couldn’t be contained in the frame.”

• Isaac Asimov explains the three laws of robotics in his own words.