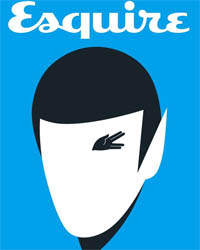 • It usually goes without saying that for every movie, little bits and pieces flutter down to the editing room floor to find their way on the DVD extras — and Star Trek will be no exception.

• Over at Newsweek, a former Star Trek: The Next Generation writer spills his guts about what it was like to work on the show. As it so happens, the story’s more insane off the screen than it was on.

• You will love this ’60s-era Esquire cover of Spock’s winking eye.

• Universal wants to remake David Cronenberg’s Videodrome? Please don’t. It doesn’t work out of the VHS era — do not make it about YouTube!

• There appear to be budget difficulties with Gore Verbonski’s adaptation of Bioshock, the incredible dystopian scifi game. This is a pity, because it’s a movie concept that’s worth throwing money at.