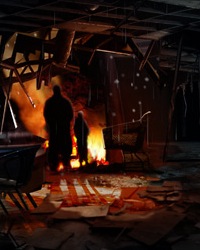 • Looks like the Teenage Mutant Ninja Turtles are coming back to the live-action big screen, yet again.

• Some Lost spoilers so major that they can’t even really be hinted at have been leaked, and I suspect they are true. But I hope not, because it’ll amount to the death of one of my favorite Season 4 cast additions.

• Artist Chris Kennedy’s concept art for the upcoming adaptation of Cormac McCarthy’s The Road is up on Flickr, and the post-apocalyptic results are both beautiful and harrowing.

• In the 23rd century, we’ll all be eating with sporks. Get your own official NCC-1701-branded spork at Think Geek.

• AMC’s own John Scalzi meets with a panel of scifi writers to discuss how blogs can be used to publish fiction. Good stuff all around.

• SciFi Wire looks at the upcoming scifi television line-up and predicts which shows will survive.