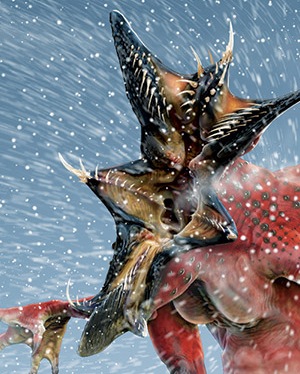 • A former NASA astronaut claims the US government has proof that man is not alone in the universe. Frankly, it sounds like someone in the Army pulled a bit of a practical joke on him.

• No surprises here, but the Radiophonic Workshop’s Doctor Who theme has been declared the best scifi theme on television.

• The latest issue of Wired is edited by J.J. Abrams, and one of the goodies he bestowed upon the magazine is some great concept art of Star Trek‘s ice monster.

• It looks official: Terminator Salvation, a movie that takes place in a violent post-human holocaust, will be rated PG-13. My hopes for this one just shot remarkably down.

• A revamped version of the classic “It’s A Bird… It’s a Plane!” Superman musical will debut in 2010.