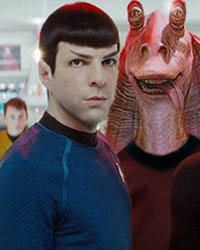 • Battlestar Galactica did a pretty decent job of wrapping up all of its loose ends, but in case you’re still curious, a new comic is coming out detailing the Final Five’s history.

• No surprises here, but Sarah Connor Chronicles has officially been canceled… er, “Terminated.” Whatever. It’s dead.

• Duncan Jones, the director of the upcoming Sam Rockwell space vehicle Moon, tells Popular Mechanics that he wants to do a Blade Runner next.

• And speaking of Star Trek, a collossal gallery of home painted models, a la the Vader Project.

• SF Signal hosts another Mind Meld: What stories have handled the time travel trope to the best effect?

• Read the story so filled with sex that Isaac Asimov forbade its republication for 54 years!

• How would the world change if a woman went back in time and sexed up every single U.S. President? Well it would be a lot more NSFW, as is this.