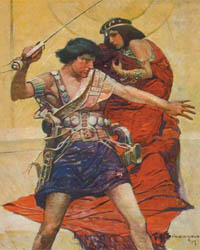 • Pushing Daisies‘ Bryan Fuller has been leading a public plea to relaunch Star Trek for the small screen for a while, and now he’s going public with some unsolicited ideas.

• Watchmen writer Alex Tse is aiming to write a movie about a an inbred boy who fights off mutants on a mountain.

• Ron Howard was apparently approached to direct both Spider-man and Batman at different points in his career. Man, what would those have looked like?

• Will Arnold Schwarzenegger appear in Terminator Salvation? My guess is no, but the controversy is good for publicity.

• According to Entertainment Weekly, the FBI can officially chill out: Interest in X-Men Origins: Wolverine remains high, despite the fact that the movie was leaked online a few weeks ago.