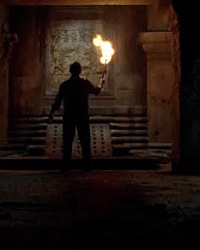 • It looks like The Sarah Connor Chronicles is dead. It’s so weird to think that a show based on Terminator could fail, but then again, Fox hates scifi.

• The Tron 2 guy looks a little flabby in his off-the-set costume.

• Amazon.com eliminated a lot of gay-oriented science fiction from the site recently. The situation reeks of some lower manager making a stupid unilateral decision. But everyone’s going bazonkers.

• The early reviews of Star Trek keep on rolling in, and they continue to be very flattering.

• Seven ways to end a popular scifi show. Is it even possible to end one that satisfies everyone?

• io9 points out that the Tripods on the cover of the War of the Worlds rock opera look a lot like iPods. Yeah, I guess they do.