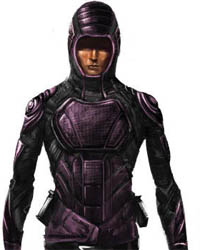 • SciFi Wire shows us a sneak peek of the costume for the new Phantom. Sigh. If it isn’t purple tights and a domino mask, it’s not the Phantom, guys.

• Sony will be adapting one of my favorite PS2 games for the PS2, Shadows of the Colossus, into a feature film.

• As Star Trek’s release date creeps closer and closer, we’re starting to see more and more preview clips. This one between Kirk and Uhura is mildly steamy.

• Caprica is looking worse and worse: The shooting script posits that you could fit 3,333 human consciousnesses onto the hard drive of a single iPod.

• Gary Oldman might bring his seething thespian animalism to the cast of Iron Man 2.

• Crazy cool picture: The hand of god, grasping a galaxy in space.