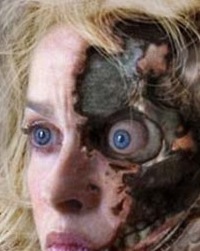 • io9 puts together a remarkably good list of potential superhero roles for The Chronicle of Riddick’s Vin Diesel. Kraven the Hunter is the best suggestion of the bunch, I think.

• Helena Bonham Carter talks to The Daily Mail about her role in Terminator Salvation. The interview includes this groovy picture of her with half her face ripped off.

• So why exactly was Terrance Howard’s role as Iron Man sidekick James Rhodes recast? Basically, the actor has no idea — he claims he was inexplicably fired. To be fair, I didn’t think he was very good in the first movie.

• Timothy Zahn, one of the better writers to tackle the Star Wars Expanded Universe, will be releasing a new novel that takes place during the orignal trilogy.

• SF Signal laments Indiana Jones‘s 2008 bust-up with the Saucermen. The nuking of a fridge, indeed.

• A good primer on the Freudian types of superhero secret identities.