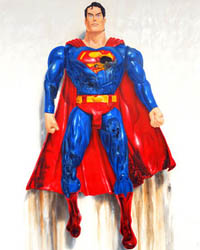 • The Wolverine Origins online leak has proven to be a huge problem for Fox, and the FBI are now involved. But director Gavin Hood ants us to know it wasn’t him.

• The next Doctor Who special gets a trailer, and it looks pretty darn good.

• The K-9 trailer, on the other hand, looks terrible. When will this dog be put down?

• Everyone loves a man who tortures superhero dolls, and Kuala Lampurian artist Olan Ventura is just that guy.

• Believe it or not, Tim Robbins could actually make an appearance in Iron Man 2 as Tony Stark’s father.

• A UK robot makes an independent scientific discovery… and proves it!