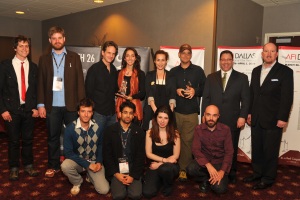 As AFI Dallas drew to a close on Thursday night, some moviemakers got to enjoy not just an audience’s warm reaction but also some cold, hard cash. The Target Filmmaker Award for Best Narrative Feature — which comes with $25,000 prize — went to Matt Aselton’s Gigantic, his film starring Paul Dano, Zooey Deschanel and John Goodman.

The Target Filmmaker Award for Best Documentary Feature, also with a $25,000 prize, went to Prom Night in Mississippi, a feature-length look at a small Southern town which held its first-ever
integrated prom (with actor Morgan
Freeman in tow). The Current Energy Award, with a $10,000 cash prize, went to
Joe Berlinger’s Crude, an examination of Chevron’s oil drilling in Ecuador. Critic Elvis Mitchell and actress Heather Matarazzo ( Welcome to the Dollhouse ) hosted the awards ceremony.

Finally, the MPS Studios Texas Filmmaker Award went to David Lowery, for his haunting, fierce and yet achingly naturalistic St. Nick, which follows two young siblings on the run in the wilds and suburbs of Texas; Lowery (who spoke with AMCtv.com about St. Nick earlier this week) receives a $20,000 cash prize along with the award. For more information about award-winners at AFI Dallas — or to better bookmark now to get a jump on planning to attend next year — just go to www.AFIDallas.com.