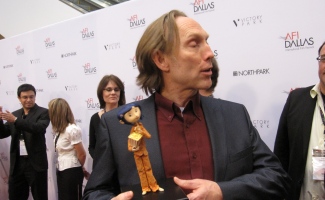 Monday night at AFI Dallas, Coraline director and stop-motion animator Henry Selick ( The Nightmare Before Christmas , James and the Giant Peach ) received the Tex Avery Award, given for lifetime achievement in animation. Previous winners have included Brad Bird (The Incredibles) and Chris Wedge (Ice Age), and the award is named for Tex Avery, the animation titan who designed Daffy Duck and coined Bugs Bunny’s catchphrase, “What’s up, Doc?”

“It’s a huge honor; he’s certainly one of the greatest all-time
animation directors, someone who pushed the boundaries of visual sight
gags as far as, or farther than, anyone else,” said Selick about receiving the award and the man it was named after.

As for making more stop-motion movies and Coraline‘s box-office success, said the director, “It’s
certainly been a great boon to us in the stop-motion field, which is
what I love the most.” Next up, he’ll produce an upcoming stop-motion supernatural adventure: “We
have one particular project that’ll be headed by a young story artist
named Chris Butler — I won’t be directing it — called Paranorman.
It’s about a boy who communicates with his dead grandma, and they fight
an army of zombies; it’s a sweet comedy. There are several other
projects on the go with Laika, which is where we made Coraline.”

On the carpet, Selick was carrying the 9-inch-tall puppet that portrayed the lead character in Coraline. Speaking about the advantages and drawbacks of having a puppet as his lead, Selick pointed out, “You know, she kind of does what we tell her to do, but at the end of the movie, she still looks much better than we do.”