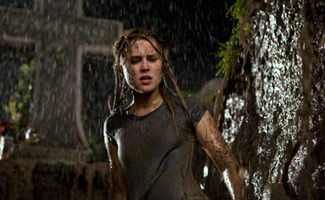 South by Southwest (SXSW) has a justly-earned reputation for grim-to-giddy horror fare. In recent years, it’s also become a venue for major studios to unveil big-name films. Those two traditions may seem hard to reconcile — but last night, both worlds met when Sam Raimi presented his new horror movie, Drag Me to Hell. Announced after the festival’s main blocks of programming had been determined, the movie was shown under tight security — no cameras were allowed into the Paramount Theater. Pre-show, the line-up stretched around the block, with scalpers prowling Congress Avenue in downtown Austin.

SXSW attendees that were able to secure a ticket to the midnight screening exploded with a standing ovation when Raimi took the stage to introduce his movie. Mock-tripping and catching his tie in his glasses as he took the stage, the director read from a piece of paper pulled from the pocket of his suit jacket: “Mr. Raimi: As the manager of the Four Seasons Hotel, it is my duty to inform you that due to excessive noise complaints…” Raimi then gave his real welcome to the eager crowd: “I really appreciate you all for coming out so late, and with such enthusiasm.”

Starring Alison Lohman, Drag Me to Hell plays like a horror film for our troubled times. The things that go bump in the night are unleashed by a mortgage that comes due at the bank, when Lohman denies an elderly woman an extension on her house payments and is literally cursed for her hard-heartedness.

Although the screening was of a work in progress, Drag Me to Hell felt like a return to the old-school Raimi tricks and treats of his Evil Dead movies. With Raimi’s familiar and much-loved tilted cameras, goofy good humor and blend of horror and hilarity, Drag Me to Hell almost felt as if the director — after years of Spider-Man movies — was making up for lost time.