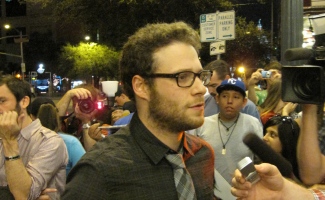 Last night’s world premiere for Observe and Report, the new comedy starring Seth Rogen as a self-medicating, self-righteous mall security guard, was a bit of a homecoming for many of the cast and crew. Michael Peña, who plays Rogen’s partner in crime-stopping, played SXSW two years ago with his band Niko Vega; brothers Matt and John Yuan, who play more of Rogen’s staff, once worked the festival as volunteers.

The comedy is grimmer than one would expect. Asked if he
was worried that the audience — expecting something less violent —
would revolt, said Rogen, “No, they can bring it; it’s OK. I’ve faced
angry mobs before; I take it as a compliment more than
anything.” As to his plans while in Austin, said the star, “I’ve eaten
barbecue several times already, and I haven’t been here that long, so
that’s an accomplishment.”

For Peña, the hard part of filming was trying to keep himself composed. “You know how when you see the outtakes, when somebody can’t get their sh-t together? I was that guy. I think [Seth] saw a little chink in my armor, and he would keep going at it, so much so that I couldn’t look at him.” Before the screening, writer-director Jody Hill (The Foot Fist Way, Eastbound and Down) summed it up: “I want to thank Warner Bros. for letting us make a weird-ass film with their money.”