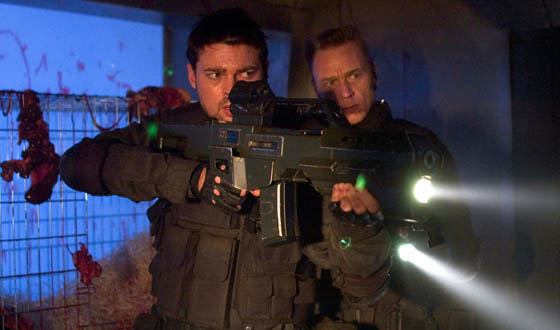 whose AMC column on the subject runs every other Tuesday. See how we cover it all for you? We do it for the love, people.

As for the e-mail directed at me, I’ll take the second question first and say, no, there has not been a single video game movie that I personally would consider good. The best I can manage here is to say that there are a couple that exist in the “don’t entirely suck” category. This is not to say there have not been financially successful video-game movies: Lara Croft: Tomb Raider did especially well at the box office, although whether that was because of the legion of Lara Croft fans or simply that Angelina Jolie is smokin’ HAWT in that little silver jumpsuit of hers is open to debate.

As to the first question, there are a number of reasons:

First, blame the Germans. Up until recently the nation of Germany allowed for some nice tax benefits if its citizens invested in film production. This in turn benefited a German director named Uwe Boll, who went about snapping up the movie rights to a number of video game titles and cranking them out fast and cheap.

This was a nice set-up for Boll, since he’s been able to make a nice living playing filmmaker. It wasn’t nice for us, because Uwe Boll makes movies like monkeys drive trucks. Through Boll, the world is saddled with flicks like House of the Dead, Alone in the Dark and Bloodrayne, which all make you want to bleed from the eyeballs.

To be fair, Boll’s not the only filmmaker with an unnatural fetish for game titles. Paul WS Anderson, who has a bit more skill and flair, has given us Mortal Kombat and Resident Evil, both of which exhibited some technical competence (and attractive female stars, of course) but not much else. Now he’s got the rights to Castlevania and Spy Hunter, and in both cases I wouldn’t hold my breath for quality.

But this is the other problem: If you’ve ever watched a video game-based movie, you get the sense that quality isn’t actually on the filmmakers’ minds, even when the thing isn’t supposed to be a slapdash B-movie funded by German dentists. I have a strong suspicion that in the mind of Hollywood, the average video game player is sixteen years old, has a double digit IQ, and is only really interested in explosions, blood and pneumatic women — so things like plot, characterization and story are seen as optional.

In point of fact, the average gamer is nearly thirty, not dumb, and while he may enjoy bombs, blood and babes, I’m willing to bet he’d happily see a movie that doesn’t assume he’s stupid. When I watched Doom, the scene where a scientist explained that a certain percentage of the human genome has never been mapped (and the part that hasn’t, well, that’s your soul, you see) made me want to throw a rock through my TV — which is ironic, as the film stars The Rock.

Finally, there’s the problem that some video games just don’t have much to hang a movie on, which leaves filmmakers obliged to make something up to fill in 90 minutes. One of the very first video game movies, Super Mario Bros. , is a case in point. The game features running, jumping and landing on turtles — not a lot to go on — so the filmmakers decided to place the movie in the world of Terry Gilliam’s Brazil and cast Dennis Hopper as a lizard. Why not, right? To say it doesn’t work is an understatement; star John Leguizamo would later mention that he and co-star Bob Hoskins got drunk to get through the experience. This is also a viable strategy while watching it.