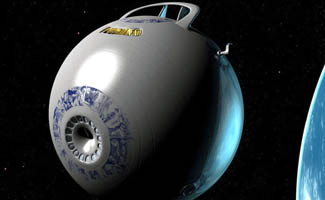 This Sunday marks the 31st anniversary of the first broadcast of The Hitchhiker’s Guide to the Galaxy by Douglas Adams. What started as a BBC radio show soon inspired a computer game, a 2005 motion picture and everything in between. Now, the eponymous guidebook lives on in another form: The Amazon Kindle 2. Obviously, the e-book is more Earth-bound than it’s galactic counterpart, but the similarities between it and Adams’ “standard repository for all knowledge and wisdom” are all too clear.

Let’s start with the way the Kindle works. Adams said this about his creation: “The reason why it was published in the form of a micro sub meson
electronic component is that if it were printed in normal book form, an
interstellar hitchhiker would require several inconveniently large
buildings to carry it around.” The same is true of the Kindle 2. Owners will find it contains everything they need to know in the 1,500-plus books it can hold, and more importantly, through its free wireless access to Wikipedia. In times of trouble, those with a printed book might panic — but those with a Kindle will not.

How does Kindle’s portability compare? According to Adams, the Guide — made by Megadodo Publications — is “a small, thin, flexible lap computer.” The new Kindle, though not flexible, is small (8 inches by 5.3 inches), thin (one-third of an inch) and lightweight (only 10.2 ounces). This thing is so sleek, it might actually be an improvement over Ford Prefect’s (Mos Def) travel companion. As to whether or not the construction of the Kindle is as robust as the Guide (Prefect’s copy survived a spaceship crash), it’s hard to say. Kindle did, however, survive this drop test.

Both books are popular. Oprah recently gave Kindle 2 her blessing, and Hitchhiker’s is said to be “more popular than the Celestial Home Care Omnibus, better selling than Fifty More Things to do in Zero Gravity, and more controversial than Oolon Colluphid’s trilogy of philosophical blockbusters Where God Went Wrong, Some More of God’s Greatest Mistakes and Who is this God Person Anyway?“

The biggest different between Adams’ electronic book and Amazon’s is, let’s face it, personality. Even with the new text-to-speech feature, the Kindle 2 is unlikely to capture the Guide‘s sense of irony and sarcasm. As Mos Def says in the movie, “I checked The Guide for the best way to rescue a prisoner from Vogsphere; it said ‘don’t.'” In essence, if you ask a Kindle about the subject of love, you’ll get pages of cultural and religious information. If you ask Hitchhiker’s, it says, “Avoid, if at all possible.”

The Kindle 2 might not have “the answer to what’s out there” or embody the brilliant humor of Douglas Adams but, in many ways, it is a Hitchhiker’s Guide to Earth. All you need is $359 to buy it. And, of course, a towel.