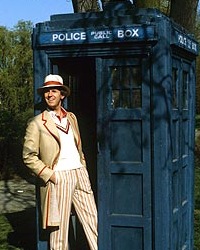 • According to the Daily Mirror, Matt Smith will also inherit a re-designed TARDIS when he takes over the role of Doctor Who.

• It’s looking very likely that The Sarah Connor Chronicles will be canceled at the end of Season 2, so a finale is being written both as a close to the show and a back door into a possible third season.

• One of my favorite scifi horror movies, Re-Animator, is being optioned for a 3D remake with director Brian Yuzna on board as a producer.

• Scott Wolf of Party of Five fame will battle Reptiloid aliens in the ABC pilot reboot of V.

• This R2D2 boombox is perfect for any breakdance battle on Earth or in a galaxy far, far away.