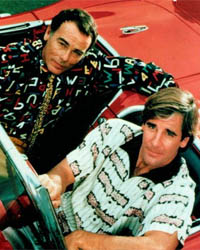 • Slice of SciFi has some new clips of the Battlestar Galactica prequel Caprica up for your perusal.

• Hey, guess what? The co-founder of the SciFi Channel hates the new name, SyFy. He joins every single viewer of the network, ever, in the appraisal.

• Philip Jose Farmer may be dead, but his Riverworld series should be coming soon to SyFy.

• An early screenplay draft of Blade Runner has turned up, and it makes it abundantly clear that Deckard is a replicant.

• SFX lists the top five science errors in science fiction. It’s nice to see this list eschew a mention of sound in space — which is an error, but also a nitpicking trope.

• There were some serious goofs in Battlestar Galactica‘s finale. And that’s not counting the fact that they revealed Starbuck to be an angel. Seriously, what is that about?