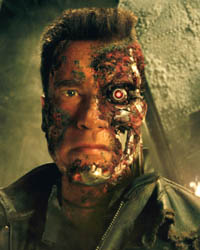 • The SciFi Channel is changing its name to SyFy, with the tagline “Imagine Greater.” It’s a terrible idea, but the network’s President is being straight-up about why: “We couldn’t own Sci Fi; it’s a genre.”

• Harlan Ellison is the grand lunatic little troll of science fiction, and here’s why: He makes crazy bets, and then settles them with a .22.

• Speaking of Harlan Ellison, he’s suing Paramount for royalties over the fan favorite Star Trek episode “City on the Edge of Forever.”

• Ouch: Arnold Schwarzenegger doesn’t like Terminator Salvation very much. And this is the man who was in Twins.

• One fantastic fan mash-up: Someone has taken the audio of J.J. Abrams’ new Star Trek trailer and stitched it up with footage from the original Trek series. No skydiving Enterprise buccaneers, here!

• And while we’re talking about Star Trek, a video collage of all the various logos used throughout the years for the series — ending, as it were, at the beginning.