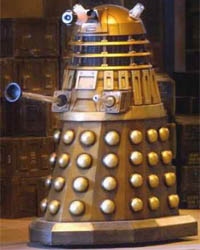 • A Doctor Who Dalek is found submerged in a UK pond, which bodes ill: This is clearly a scout for the Invasion of Earth which lost its chronological bearings in the time stream.

• Orson Scott Card will do a series of young adult steampunk novels. In other words, he’s realized where all the money is in scifi literature right now.

• io9 lists a number of high-tech (and obviously fictional) gadgets that detect magic.

• The producers of Life on Mars talk about seeing the writing on the wall and opting to end the series properly, as opposed to praying for a last minute ratings reprieve.

• The sequel to one of my favorite science fiction video games, Bioshock, gets a captivating teaser site. But can the sequel possibly have the same emotional effect as the original?