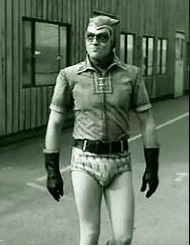 • Inching ever closer to the Watchmen debut, promo materials are now coming full force: Here’s Zack Snyder and Dave Gibbons talking about the movie, a feature about Nite Owl and Rorschach and a video about The Comedian and Ozymandias.

• The Nebula Award winners have been announced, and as usual, the list makes a great primer for last year’s must read science fiction.

• This is fantastic: Daft Punk will don dayglo unitards to do the soundtrack for Tron 2.

• Screenshots from the Terminator Salvation game inadvertently spill a lot of the neater details and heretofore hidden robots of the plot.

• io9 lists the elements of Watchmen that have ended up on the cutting room floor. No Burgers ‘n Borscht? Sacrilege!

• SF Gospel lists four Alan Moore stories better than Watchmen. I pretty much disagree across the board, especially since one of them is a chapter of the graphic novel, which doesn’t make a lick of sense.